Kusum and Sushil Ansal at a Dinner Party for South African President, Jacob Zuma at Taj Palace, New Delhi on May 03, 2010. 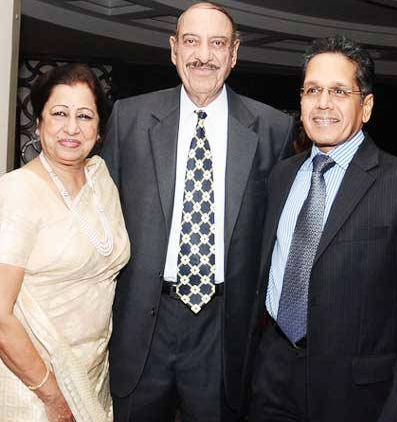 Kusum and Sushil Ansal at V C Burman’s Party at Leela Kempinski Hotel, New Delhi on April 27, 2011. [Note: In 2011, Ansal had his book “Brick by Brick” unveiled by no less than the Maharaja Gaj Singh of Jodhpur at a glittering ceremony held at Rambagh Palace, Jaipur; No Photos Available.]

Sushil Ansal at an Art Event by Anjanna Kuthiala in Mumbai on March 18, 2012.

Sushil Ansal at the Cocktail Dinner of the 2nd Delhi Literature Festival, held at Claridges, New Delhi on February 9, 2014.

Sushil Ansal at the launch of Nirav Modi’s First Delhi Boutique on March 24, 2014.

Further reported: on November 12, 2016 “Sushant Golf City, Lucknow was alive with the excitement of addition of a great feature to the township. A helipad was inaugurated at driving range by Mr Anerood Jagnauth, Prime Minister of Mauritius and his wife Mrs Sarojini Jagnauth; in presence of Mr. Sushil Ansal. Mr. Sushil Ansal felicitated the Prime Minister and his wife with bouquet and a shawl.”

Post Script: What can we possibly surmise of ‘advanced age’, when RamJet [Chosen Advocate of Sushil Ansal, previously] sets this example?