Dial D for Don chronicles the adventures of a decorated Police Officer. The facts are intense. At the centre of it all is The Don. The Don always sells. And this book too will earn from his name, for the most part. There are other stories too. “Operation Desert Safari“, detailing the rescue of Thekkat Siddique from 12/22 Sarvapriya Vihar, New Delhi on 18th March, 2001 is the best of the lot.

“…In December, 1991, I had given dates for shooting to actor producer Feroz Khan for his film Yalgaar. He had taken the whole unit for shooting in Dubai. During one of the shootings, Firoz Khan introduced me to one Mr. Dawood Ibrahim and also to his brother Anees during another shooting session. After that, Anees used to visit us regularly during the shootings and also at the place of our stay. Since Anees used to come frequently, I become well acquainted with him…”

“The plan entailed first picking up the saaman at Bhiwandi, hauling it across the city to Bandra and handing it over. The package would have to be delivered directly to Sanjay, in person, at his Pali Hill residence, Ajanta. It all seemed simple enough…

Salem had heard it was Sanjay who had tipped Shakeel off about his expected presence at the event…A few months later Salem organized four gunmen ‘to take care of’ Sanjay. The actor was in Goa at the time, along with friend and director of Kaante, Sanjay Gupta, known to him as Gups. Salem’s instruction to his boys were clear: Go after Sanjay and kill him in Goa or at Mumbai Airport upon his return… When Gups asked Akbar Khan to intervene, the latter agreed. They managed to reach Mumbai Airport and Khan ferried them across town in his Hyundai Santro, saving them from the wrath of Salem and his shooters…

Salem later boasted that he decided to forgive Sanjay because the actor had called him on his satellite phone (which used to cost Rs. 1000 per minute for a call) and tearfully sought his forgiveness. Salem would boast about this incident, saying to his audience that he had decided to forget Sanjay’s betrayal out of the goodness of his heart.“ 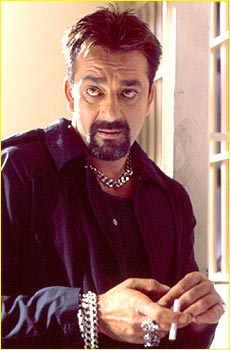