A Retired Hon’ble Chief Justice of India A.N. Ray, though expected to be the President, one day, once said, as evidenced by George H. Gadbois, Jr, “An Indian Chief Justice, like the Lord Chief Justice, in England, should not take up any post-retirement positions.”

Taking up a post-retirement position is one thing; soliciting one is quite another. Soon after the pronouncement in Govindaswamy, Markandey Katju offered an ‘elaborate opinion‘ to the State Government of Kerala, provided he was approached. If that was not enough, he also posted in Facebook:

Article 124(7) of the The Constitution of India, 1950 states that “No person who has held office as Judge of the Supreme Court shall plead or act in any Court or before any Authority within the territory of India”. It has been hotly debated previously that the act of giving written advice, by a Former SC Judge, to be tendered in a Court of Law, comes within the mischief of Article 124(7). The debate has had inconclusive results. The Hon’ble Delhi High Court in 2015, in Common Cause [W.P. (C) No. 866/2010], in view of the Supreme Court’s Order dated 20.01.2012, in Grenadier Association [W.P. (C) No. 513/2011], merely directed the Registry “not to accept Writ Petition(s) without raising objections in cases where opinions of Retired Judges are annexed to the Writ Petition”.

Objections have not guarded against unethical chamber practices built up by Former SC Judges. Present Hon’ble Chief Justice of India T.S. Thakur supports this. He believes that Judges are a ‘valuable human resource‘, one that should not be wasted after retirement.

Not surprisingly, in Govindaswamy Review Proceedings, the SC has condoned Katju’s offer of an ‘elaborate opinion’ to Kerala. It has, exercising epistolary jurisdiction, converted the Former SC Judge’s Facebook Post into a Suo-Moto Review Petition. Notice has been issued to Katju, for 11.11.2016, to ‘participate in the proceedings.’ 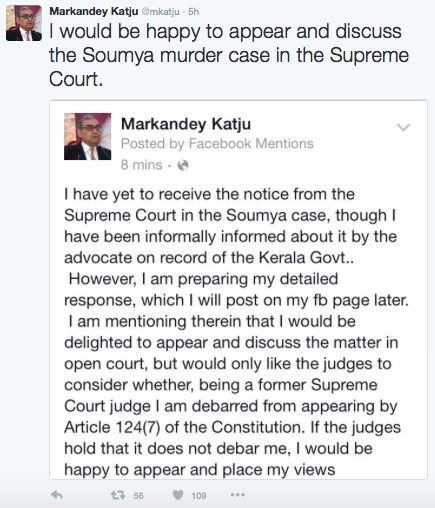 Will SC’s Order serve as a precedent for Former SC Judges defending their written advice, to a party, in Open Court? We shall wait for the story to unfold further.

Armed with 35 years of hindsight, Justice Bhagwati, in 2011, expressed regret for his 1976 Judgment upholding Prevention Detention during the Emergency. Justice Chandrachud did so in 1978 in case his chances of being CJI were blighted. Were these declarations simply a flourish to catch the public eye? Do Judges even concede they are wrong?

“Prima Facie, the statements seem to be an attack on the Judges.”

Inside a Courtroom, where he passed Judgements, Former Judge Markandey Katju was on 11.11.2016 pulled up for contempt over blogs criticizing Supreme Court Judges. “I don’t bother,” he declared before storming out.

In January, 2017 a Bench of Justices Ranjan Gogoi and UU Lalit accepted the unconditional apology tendered by Justice Katju for what they had viewed as personal attacks against several Judges of the Supreme Court.

Represented by Senior Advocate Rajeev Dhavan, Katju J. assured the Court that the offensive post had since been deleted from his Facebook page, and that he had “utmost respect” for the Judges of the Court, as well as the judicial system.

Don’t Mess with People from Allahabad.