There is a certain degree of lasciviousness that’s attached to crime or investigative reporting. Because the police force is predominantly male and while there are women crime reporters, men outnumber them easily; stories that emerge from the CBI or from the police have an undeniable male gaze. And so the first reports of Anca Neacsu being arrested along with controversial arms dealer Abhishek Verma were almost greeted with wolf whistles.

The pictures of her walking into the court when they were produced soon after the arrest, showed a platinum blonde in a white Western suit and aviator sunglasses. As cameras clicked photos of her at Patiala House Court, striking at 5 feet 11 inches, stories of the mysterious Anca and her modelling past surfaced all over. 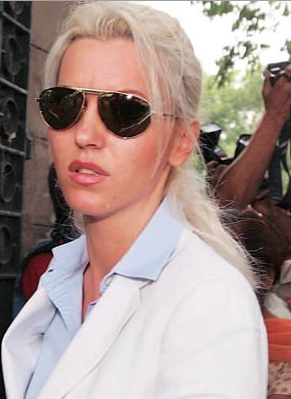 The CBI’s case against the two was straightforward. A Swiss firm called Rheinmettal Air Defence was blacklisted by the Ministry of Defence in 2012. Anca and Abhishek had set up a firm called Ganton India in 2005, and according to the CBI, they got in touch with RAD and offered to lobby on their behalf to get them off the blacklist. Abhishek’s father Shrikant Verma was a Congress MP and so was his mother Veena, and so his connections with those in power at the time were well established.

For their lobbying services, RAD paid them 530,000 US dollars through their affiliate company in the US, which was handled by Edmund Allen. While the payment went through by 2011 to their New York Account, the deal with Allen went sour and he complained against them to the Indian authorities. That’s when CBI and the Enforcement Directorate (ED) slapped charges of bribery and money laundering on Anca and Abhishek, raided their Vasant Kunj farmhouse on 7 June, 2012, and arrested them soon after. It was just four days after they’d got married.

‘Tihar was my honeymoon,’ she said in her distinct East European accent. Her island of privacy was cell number 17 at ward 8, and her cellmates were Sridevi, accused of cheating; Manisha, accused in a cheque-bounce case; and Archana Aunty, who soon became her ‘jail mum’.

A Hindustan Times Article of January 2014 had a headline that read ‘Arms dealer, wife have a jailhouse romance’. The jail spokesperson is quoted as saying there was nothing special and all couples get this time together but anonymous sources cite how Anca dressed up for the meetings. Perhaps the most romantic aspect is that they decided to never eat at these meetings. They didn’t need to because unlike the other inmates, they never needed to worry about their next meal, even in jail; they never went hungry.

Anca tells me that she likes to dress up for work when she comes to court. ‘Judges are not looking at my clothes, they are looking at my case,’ she claimed, and she even asserts her position with a clause in the jail manual. Chapter 6 para 31 of the manual says: ‘Maintenance of certain prisoners from private sources – A Civil prisoner shall be permitted to maintain himself, and to purchase, or receive from private sources at proper hours and days – foods, clothing, bedding or other necessities, but subject to examination and to such rules as may be approved by the Inspector General.’ It is this simple rule that empowered Anca to ‘maintain’ her designer wardrobe in jail. Photographs taken by the jail photograper show her on Christmas Day with her Versace couture sunglasses and Louis Vuitton wedges in real 24 carat gold leaf work. 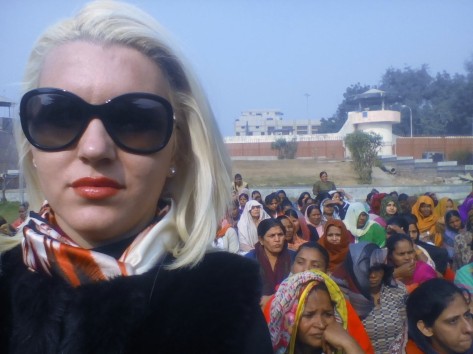 I am a European national and an undertrial lodged in Jail number 6 for two cases of CBI and Enforcement Directorate. Besides my mother-in-law who is 73 years old, there is no relative here in India. My husband is also lodged in Tihar Jail for the same cases as mine.

The details of my article to be procured are given below:

The application was soon accepted according to jail rules, and so were a series of amenities that she applied for to ‘maintain’ herself in jail.

On the night, he was released on bail, the couple were joined for a celebratory dinner at Maurya Sheraton’s Bukhara restaurant by Bollywood Actor Rajpal Yadav.

– Sunetra Choudhury, Behind Bars – Prison Tales of India’s Most Famous, ‘The Platinum Blonde who Wore LV in Jail’, (Roli Books, 2017).

Abhishek Verma tweeted ‘this’ to the Author [@sunetrac] and RNR [@rudespot]: