A copyright infringement action over proprietary software under the Respondent’s ‘ADVISOR’ trade mark triggered the dispute. The Respondent wished to direct Mr. Robert “Bob” Zeidman to compare the softwares and to report the Court as to whether the source code and object code of the Petitioner have infringed the copyright of the Respondent.

Before the SC, Senior Advocate Mukul Rohtagi argued on behalf for the Petitioner:

“In matters such as this, an expert should not normally be taken from outside the country inasmuch as various confidential materials and data would have to be shared with such expert to enable him to conduct the exercise of comparison. If at a later point in time such material and data is found to be in possession of any third parties, it would be impossible to hold such a foreign expert responsible and the processes of the Courts of the country would not be able to reach such an expert and grant appropriate relief.“

I dreamt… What are the books you have authored? Can you tell us more about them Mr. Zeidman?

I’ve written a number of engineering books that I’m proud of, like “The Software IP Detective’s Handbook,” my book on software forensics, but I think the more interesting ones are my three novels. The first was “The Amazing Adventure of Edward and Dr. Sprechtmachen.” It’s a young adult novel about an inventive young boy and a strange scientist/engineer who become friends, blast off in a rocket to Pluto, and accidentally start a worldwide race war that they need to figure out how to stop. It started out as a story to my son. We would go on trips to visit relatives and he’d get restless on the trip home. This particular story sounded like it would make a good novel so I wrote it.

My second novel was “Horror Flick” about a movie that’s so bad, people die watching it. I just like old horror movies. My wife was into Stephen King novels, and I thought I’d give it a try with a silly, scary story. It’s a lot of fun. It won an award at the Hollywood Film Festival where I walked the red carpet with Harrison Ford, Patrick Swayze, Penny Marshall, Sandra Bullock, and a lot of other celebrities. 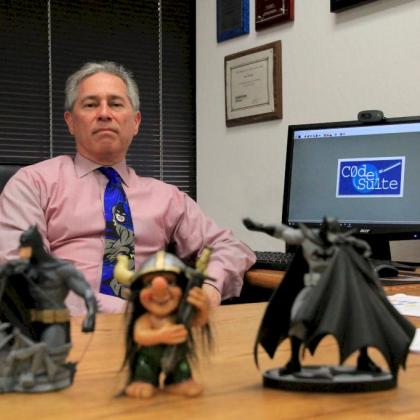