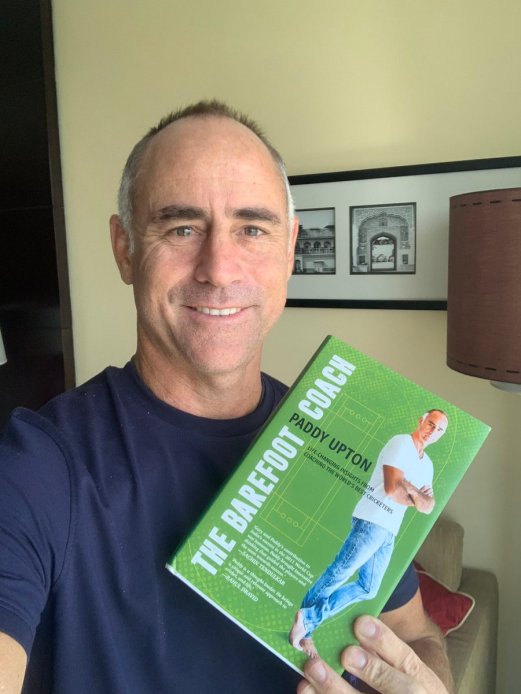 Patrick Anthony Howard ‘Paddy’ Upton is famous for his powers of mental conditioning and coaching sportsmen. The following is an excerpt from Paddy Upton, The Barefoot Coach, (Westland Sport, 2019).

“It is worth having a conversation about the concept of ‘mental toughness’, which is currently the most overused and least understood concept in sports psychology. I neither agree with nor use the term. I contend that mental toughness is like Batman and Superman. We all know them. But they’re not real and don’t actually exist.

Of all the instruments available to measure mental toughness, there are only two that have been validated: The Australian Football Mental Toughness Inventory (AFMTI) and Mental Toughness Q48 (MTQ48). However, there is no agreement on whether these instruments are relevant for both men and women. There is disagreement about the relevance to different age levels, different experience levels, different levels of competitiveness and, importantly, there is no transfer between sporting codes. There is also no agreement on whether mental toughness is to do with nurture (something we’re taught) or nature (something we are born with).

When we study the best of the best, consider the following as a list of definitions associated with mental toughness: massive belief in self and one’s ability; emotional control; clear thinking under pressure; ruthless pursuit of goals; operating well in chaos; not intimidated by others; unaffected by loss and failure; easily spots weakness in opponents; inspirational, popular, influential; and compulsive liar. I would bet that, until you got to the last point, you were in agreement that this was a pretty accurate list of mental toughness attributes. However, the list I provided above is not a list of definitions of mental toughness – those are character traits of psychopaths taken from an article on psychopathy.

At this juncture, you’d be perfectly justified in asking why I would include this list of psychopathic traits in a discussion on mental toughness. Psychopaths are born with brain functioning that is different from ‘normal’ people, and this is not reversible. As luck would have it (for them), these brain differences manifest outwardly in that individual possessing many of those performance assets mentioned earlier – all of which are highly sought-after qualities for success (and leadership), and of so-called mental toughness. This is the reason for so many psychopaths achieving such high levels of success in business, as well as in politics and sport.

In industries like the media, the legal fraternity, finance, banking and politics, Prof. Clive Boddy from Middlesex University suggests one in five top Executives or CEOs are in fact psychopaths. You may be struggling to join the dots between serial killers and successful businessmen (and athletes). The only difference between a corporate psychopath and Hannibal Lecter (Silence of the Lambs) and Co. who torture animals as children and end up as jailed serial killers as adults, is their propensity for violence. If you’re still not quite joining the dots, remember Lance Armstrong, the cancer survivor and seven-times Tour de France champion who put both cycling and the fight against cancer on the world map! A study of Armstrong the cyclist will reveal possibly all you need to know about what mental toughness looks like. This is the same person that the United States Anti-Doping Agency (USADA) called ‘the ringleader of the most sophisticated, professionalized and successful doping programme that sport has ever seen’. He cheated, lied and bullied his way to those seven titles, and when threatened with exposure, he covered his tracks, intimidated witnesses and lied to hearing panels and to the world. When the prosecution presented irrefutable evidence of his doping from twenty-six people, including eleven of his own teammates, he still vehemently denied having ever doped. The prosecution went on to suggest that some of the most shocking evidence had to do with Armstrong’s vindictive, mendacious and vicious character. One report suggested, ‘He comes across less like a cyclist, more like a psychopath.’

I did some of my best and least effective mental conditioning work with Gautam Gambhir, the International Test Cricketer of the Year in 2009. He was so riddled with insecurities, doubts and vulnerabilities. He was one of the most negative people I have ever worked with. I tried everything I knew to at least try to get him to be a bit more positive, become more optimistic, and to at least get some perspective. We must have had fifteen sessions on the bus in one year, but I just couldn’t help Gautam shift. Until I came across some research that could potentially help me understand why.

It was either that I lacked the skill or knowledge to help Gautam (which could have been the case), or there were some lessons to be learned from Martin Seligman’s work on positive psychology. Positive self-talk, being positive, is very important, especially when we want people to ‘believe’. It’s also worth mentioning that a dose of pessimism is healthy, especially in situations where mistakes may have significant consequences. Any athlete engaging in a dangerous sport needs to have a healthy dose of pessimism. Too much, and they’ll never get out of the starting blocks; too little, and they may not reach the finish line. George Bernard Shaw famously said, ‘both optimists and pessimists contribute to society; the optimist invents the aeroplane, the pessimist the parachute.’

Because people are different, the concepts of being mentally tough, positive and optimistic, or of being in control of one’s emotions, at least outwardly, are unrealistic for everyone. M.S. Dhoni, as an example, has incredible emotional control. He never shows emotion, and he is lauded for that. Just as with being openly optimistic as opposed to being pessimistic, ‘having emotional control’ is sometimes seen as evidence of a player’s mental toughness. But I would go as far as to say, with the greatest respect for MS, the man and the cricketer, that it is not emotional control, but lack of access to emotions. MS is not wired as an emotional type. It’s almost as if he doesn’t have them; a performance-enhancing gift from birth. Imagine taking that trait as the ultimate characteristic of a ‘mentally tough’ athlete, and then try to prescribe that to someone who is very emotionally wired, like his successor, Virat Kohli. Virat uses his visible and overt emotional charge to drive his success, whereas MS’s success is facilitated by his lack of emotional charge.

I honestly believe that we should do away with the concept of mental toughness and replace it with something that is more real and relevant to most people. It has to be authentic to the individual and something he or she can relate to. The overwhelming majority of players lack confidence, have insecurities, doubts and vulnerabilities. So do most of us. We’re human and this is normal. Let’s keep it real.”