“A little known fact is that Nani was working at the Bombay racecourse as a totalizer while he was studying. The job demanded accuracy and speed.

In the early stages of his career, Nani would take up all sorts of cases. “My Lord, I would have sat down long ago but for my conviction that in this Court no case is lost till the last word is spoken”.

Nani was supposed to appear for A.D.M. Jabalpur v. Shukla against the Government of India but could not do so. Soli Sorabjee: “Nani was either overconfident or it was an excuse to justify his absence”. 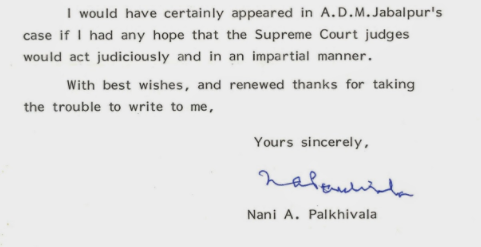 Nani, on 13.05.1973, addressed The Triplicane Cultural Academy in Madras. Nani ridiculed the idea of a ‘Committed Judiciary’. It is like ‘Boiling Ice-Cream’.

Nani’s regard for Sathya Sai Baba is well known.

One man who could claim to know Nani very well is Justice Yeshwant Chandrachud. They joined the Government Law College as lecturers the same day in 1949. And they quit as lecturers also on the same day, 5 years later.”