“My diminishing respect for you ends today.”

It is of interest that the SC has admitted previously that there is “some superficial similarity” between the questioning of the appointments of Hon’ble Justice N.V. Ramana in (2013) 3 SCC 99 (“The Ramana Case”) and Mr. P.J. Thomas, as Central Vigilance Commissioner in (2011) 4 SCC 1 (“The CVC Case”). In The Ramana Case the appointment of the Judge was allowed to stay. In The CVC Case the impugned appointment of Mr. P.J. Thomas was quashed.

What is the “superficial similarity” though? There was a criminal case registered against both Hon’ble Justice N.V. Ramana and Shri P.J. Thomas, separately at separate times for separate crimes. However, the Constitutional Authorities who appointed the Judge did not know of the case against him (and thus the consultative process could not be faulted). In contrast, the Constitutional Authorities who appointed the Commissioner did know of his case (and thus the then Prime Minister, Mr. Manmohan Singh had to concede in Parliament that he made an “error of judgment”). The Unchanged, Unrepentant Maverick Mr. Ram Jethmalani nonetheless wrote then too, theatrically, “despite the Honourable Prime Minister’s excuses, P.J. Thomas’ selection appeared to be a deliberate decision compelled by a hidden agenda rather than an error of judgment”.

The instant the Petition against the present Central Vigilance Commissioner, K.V. Chowdary finds it way to the Court, the question of the Prime Minister’s knowledge shall return. Mr. Jethmalani has already made available, evidence in that regard, to the People of India. “What a Playa”! 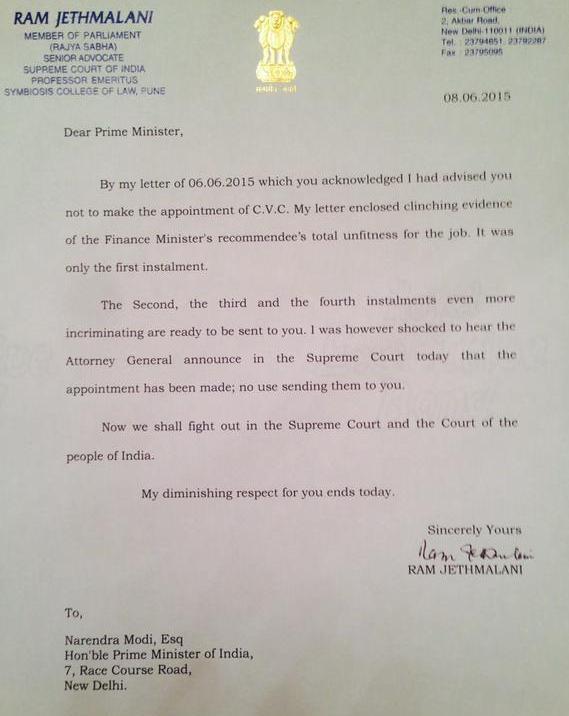