An inquiry was sought into the circumstances of death of District Judge, Brijgopal Harikishan Loya. The petitions were essentially based on articles published in Caravan on November 20/21, 2017. The issue was whether the death of Judge Loya was due to natural causes, or there are circumstances which raise a reasonable suspicion about an unnatural death.

Senior Advocate Dushyant Dave and Prashant Bhushan, none of whom I have respect for and have little proof against, fought hard against Don Salve and [obviously] did not win. Four Judges were called into question by Mr. Dave. Repeatedly, the Court was informed there is no personal agenda.

Hon’ble Justice Dr. D.Y. Chandrachud was fantastic as he usually is. I quote [for forever belief] the words:

“The petition is a veiled attempt to launch a frontal attack on the independence of judiciary and to dilute the credibility of judicial institutions. There is absolutely no merit. There is no ground for the Court to hold that there was a reasonable suspicion about the cause or circumstances of death which would merit a further inquiry. The conduct… as we have indicated, is lacking in bona fides and reveals a misuse of judicial process. Dismissed.” 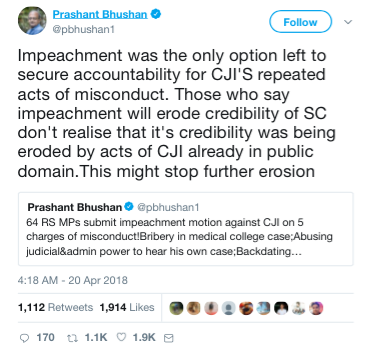