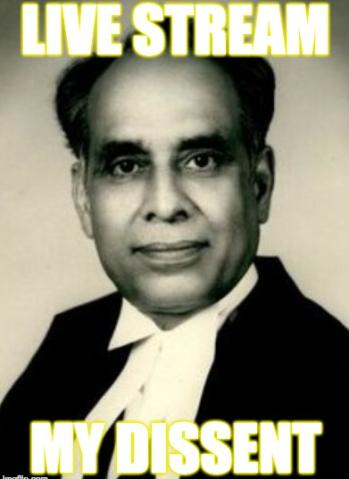 RNR, May 13, 2017 : “I intuitively conclude at this juncture that mobile phones inside Courtrooms undermine the judicial process. One should be not be allowed to record, broadcast or communicate with outsiders while inside Courtrooms, without specific permission from the Court itself.”

RNR, November 13, 2017: “Even if Live Tweeting is to be permitted one day, it should be left to trained, chosen and guided fingers. There would be then no cause for shame or embarrassment and Live Tweeting can hope to be more than just a self-regulating, public movement.”

This reflects suspicion on the job of a Former Rhodes Scholar, Gautam Bhatia.

Second, Welcome Live-Streaming. First-Week October, when India is awarded the next Chief Justice of India, I astrologically expect further decisions.

Excellent, that only the Master of the Roster in Court No. 1 and those who he chooses to Bench with, are rewarded the camera in a Pilot Project. The CJI, The Master always bites the bullet.

2. The Court may lay down guidelines/criterion to determine what cases constitute proceedings of Constitutional and National Importance to seek permission for broadcasting.

Judges make Law. They are eligible to determine which proceedings of Constitutional and/or National Importance require broadcast!

3. Use of the footage would be restricted for the purpose of news, current affairs and educational purposes and should not be used for commercial, promotion, light entertainment, satirical programs or advertising.

Footage is for viewership, news, education! I have to believe that stand-up comedians shall not mimic the actions of Judges and Tehelkas/Caravans of journalism shall not publish screen-shots for promotion. Welcome, further case loads.

4. Without prior written authorization of the Supreme Court of India, Live Streaming or the webcast of the proceedings from the Supreme Court should not be reproduced, transmitted, uploaded, posted, modified, published or re-published to the public.

Yes. Judges shall spend some hours in granting authorization to hundreds of journals, channels, humans who wish to publish and transmit. Life has more time than ever before.

5. Any unauthorized usage of the Live Streaming and/or webcasts will be punishable as an offence under The Indian Copyright Act, 1957 and The Information Technology Act, 2000 and any other provisions of the law in force. The Law of Contempt should apply to such proceedings; prohibitions, fines and penalties may be provided for.

The fines must be decided. RNR just downloaded from KickAssProxyTorrents!

6. The Court of Appeal in England, in November 2013, introduced streaming its proceedings on You Tube. The telecast is deferred by 70 seconds with the Judge having the power to mute something said in the proceedings if he feels they are inappropriate for public consumption. The camera should not focus on the papers.

Judges, while hearing, shall spend minutes deciding what to mute as though kids are watching Basic Instinct/Enter the Dragon. A football match broadcasted with a 70 second delay is not a live broadcast. Live Streaming is no longer live.

Lawyers have transformed into stenos, as if they have attended a course on journalism. Live Streaming would help the young ones to concentrate. There are tomes written on what certain physical actions mean and what usage of certain words indicate. I appreciate the chances of knowing at what minute of the hearing the Judge touched his ears, nose, forehead. They all bear meaning. I would love to know whether the CJI chose his left brother first or the one on his right, to whisper what he thought was relevant. Since privacy is important(!), it is a must that all important actions in a Courtroom are watched by Big Brother. Do not let the cup slip. All while a hearing is concluded do not Live Stream where your decision is destined to travel. Otherwise, when decisions would change with greater thoughts and greater power, you would not be what you were supposed to be in your next swim.

‘Thank you, RNR. You had correctly warned us earlier. You are always right‘, said Ray.