“The Strict Liability Rule under Common Law is a relic of the past and should not be given effect in the Indian context.”

There is certainly a phantom thread concerning the Rule of Strict Liability and it is not enough to say, as Lord Bingham of Cornhill did in Transco plc v. Stockport Metropolitan Borough Council, [2003] UKHL 61, the intellectual effort devoted to it has brought forth a mouse.

Union of India v. Prabhakaran Vijaya Kumar, (2008) 9 SCC 527 did ‘witness’ a ‘swing once again in favour’ of the Principle of Strict Liability. So did Justice Adarsh Kumar Goel [Chairman, National Green Tribunal] in LG Polymers India v. Union of India when ‘Strict and Absolute Liability’ was established for the loss caused by the leakage of a hazardous gas at 03:45 AM on 07.05.2020 at Vishakhapatnam. Section 124A of The Railways Act, 1989 also identifies the applicability of the Principle of Strict Liability [Union of India v. Rina Devi,(2019) 3 SCC 572; Jameela v. Union of India,  (2010) 12 SCC 443]. 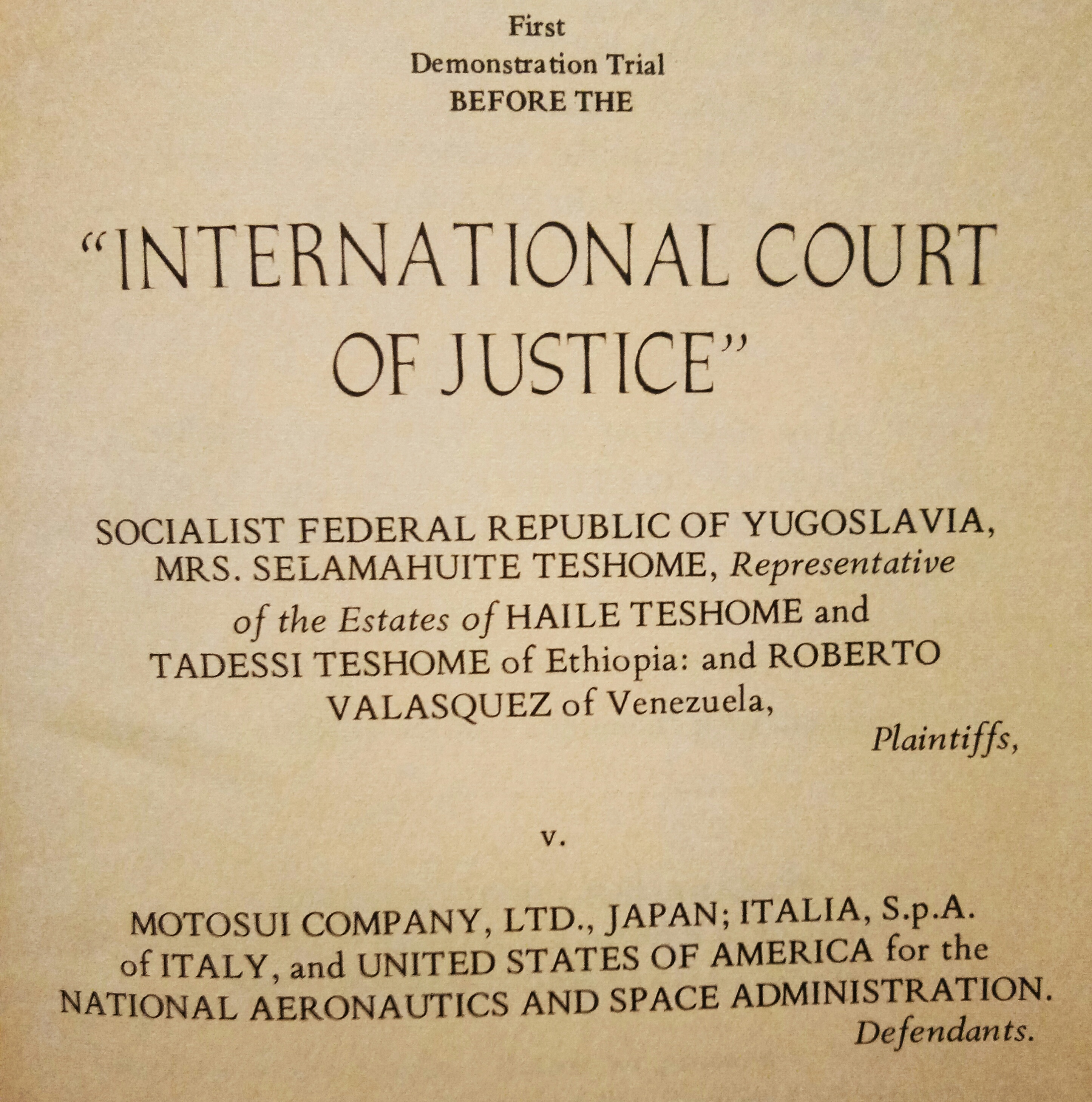 Charles S. Rhyne, President, ‘World Peace Through Law Center: “We planned both a criminal trial involving an airplane hijacking and a civil trial involving a falling space ship. Unfortunately, the criminal trial could not be carried out in Belgrade, but we do hope to present it at the Abidjan, Ivory Coast, World Conference, August 26-31, 1973. CENTER decided to help remove the fear of International Court adjudication.”

Statement of Assumed Facts: “Pursuant to a contract with the Italian Government, the National Aeronautics and Space Administration of the United States launched a space vehicle which had been primarily manufactured and assembled by the Italian Manufacturing Company, Italia S.p.A.. The space vehicle incorporated within its machinery a retro rocket manufactured in Japan by Motosui Co., Ltd.. While entering orbit over Yugoslavia, a failure, of undetermined origin, occurred in the retro rocket. The failure caused an explosion, which in turn caused the crash of the space vehicle into the city of Belgrade. The crash crossed property loss to the Federal National Assembly Building. In addition, Haile Teshome, a visiting Diplomat from Ethiopia, and his Son, Tadessi Teshome, who was accompanying him on his trip to Belgrade, were killed. Also, Roberto Valasquez, a Businessman from Caracas, Venezuela suffered personal injury consisting primarily of the traumatic amputation of his left leg. No negligence or fault was found in the manufacture of the retro rocket in Japan, or in the assembly and manufacture of the satellite in Italy, or in the launching of the satellite in the United States.”

Opinion of Warren E. Burger, The Chief Justice of the United States, Presiding Judge: “There was no showing on this record that Italia or Motosui was at fault.”

Opinion of Justice M. Hidayatullah, Chief Justice (Retired) India: “Ordinarily, no suit may be brought by private parties before the International Court of Justice, but by a Special Treaty the jurisdiction of this Court has been extended. Any country embarking on launching of space objects must be deemed to act at its peril, and if mischief is caused to others, it must be made answerable for all the damage and injury which is the natural result. I have no hesitation in applying the Strict Liability Principle to space exploration. Indeed, the United States of America, the launching State, does not seriously contest this proposition. The Japanese Corporation was no more concerned with the launching than the manufacturers of hundreds of others components that must have been incorporated into the fatal vehicle. To pin responsibility on it under the Strict Liability Rule this fact had to established and it has not been done. The space vehicle was owned by the Italian Corporation. Strict Liability cannot take within the net every person connected with the space vehicle, however tenuous the connection. I hold the Italia S.p.A. not liable under the circumstances.”

Very few would be able to draw the link between Justice M. Hidayatullah and Yugoslavia or Belgrade. It is as noteworthy as is the little attention paid, by Advocates in India, to space exploration or Strict Liability.

The Space Activities Act, 2016 in Japan imposes Strict Liability for ‘rocket debris damage’ and ‘satellite debris damage’. ‘The creation of additional space debris and the de-orbiting of objects and their uncontrolled return to the Earth can cause injury to innocent third parties – who will find it extremely difficult to prove the source of the damage because of the complexity of the mechanism of the space vehicle and the unlikely existence of any evidence after its fiery descent and collision’.

Without Strict Liability, there could be a lengthy and costly investigation into the fault of the launching State for the harm caused on Earth. Strict Liability Regime also encourages efficient precautions for satellite-owners. To analogize, it would be considered absurd and unprincipled to solely blame the owner of a hijacked ship for the harm caused by a thief when that thief deliberately rams it into another boat. Similarly, the owner of a satellite should not be forced to pay for harm caused by its stolen satellite without an opportunity to be compensated in turn.

Even further, one day.